The Secret to Perfect Beef Roasts and Steaks

Anyone can cook a hunk of meat.  But doing it to perfection?  That’s the tricky part.  So what’s the secret?

I’ll always remember the first time I saw The Matrix my junior year of high school.  The special effects, the amazing “bullet-time” cinematography, the unprecedented martial arts and the gripping plot.  But there was something else in that movie that stuck with me all these years.  The steak.  If you’ve seen this movie, you know what I’m talking about.  (If you haven’t, you really should.) Anyhow, that’s right, the steak scene:

Hello gorgeous!  Oh, that elusive, perfectly cooked hunk of beef.  Amidst the amazing displays of Kung-Fu and fast paced action, my mouth watered.  I wanted to eat that.  And whether it be a steak, a roast, or something in between – when it comes to beef, the Holy Grail of beef is prepared one way:  Perfectly, crustily seared on the outside and then medium rare, through and through.

We’re probably all too familiar with a beef coming out looking like this: 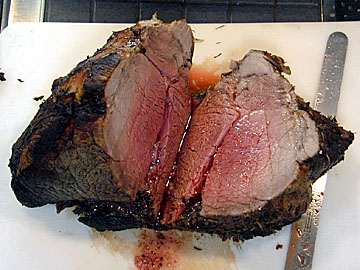 This, my friends, is not a good thing; at least 50% of this roast is basically inedible.  Note how the very outside is a sooty black, followed by the top 1/3 of the beef being totally gray and completely overdone, followed by a bit of pinkish, followed by some pink and a gelatinous, bloody raw at the bottom.  In other words (forgive the ‘artwork’ here), it looks like this:

This is not what we want.  What we want is something that looks like the steak in the cover-photo of this post, or the steak in the Matrix clip from above.  In other words, we want a steak that is delicious and crusty on the outside, and a perfect medium rare through and through.  We want our steak to look like this:

FIGURE B: Crusty on the outside, perfectly medium-rare throughout.

And how do we achieve this thing of beauty?

Here’s the secret:  It’s got to be the same temperature through and through when it begins cooking, and it’s got to come up to temperature evenly during the cooking process.

The #1 reason for winding up with striations of doneness (Figure A) is that the beef is super cold (if not still frozen) in the middle, and the temperature goes up a few degrees for each layer until you hit the outside.  How does this happen?

Because 99% of recipes I’ve read for how to cook a roast beef or a steak recommend taking your beef out of the fridge 20 to 60 minutes before cooking.  BAD IDEA.  A while back, I had a beautiful New York Strip Roast that was in the 4lb range.  I took it out of the fridge and stuck an instant read thermometer in it right away; and it was about 40F through and through.  After being out on the counter for 1 hour, the outside was up to room temperature, the first inch or so was about 60F, the second inch was about 55F, the third inch was about 45F and most of the middle was still the same temp, about 40F.  In other words, the way it was on the counter-top mirrored the way it came out of the oven, less 90F.  So the middle was a perfect medium-rare at 130F; the next layer was a nice medium at 135F, the next layer was well-done at 145F, and the rest of it was about 155-160F (i.e., ruined).

So here’s the thing:  Whether it be a 4lb roast or a nice steak, you’ve got to either (A) leave it out on the counter long enough for the whole thing to reach room temperature (which in most cases, and especially in the case of a large roast “Ain’t nobody got time for that!”)… or (B) forget that whole warming up on the counter thing and just start cooking it as soon as it comes out of the fridge.  Yes, it’s going to take longer to cook that way, but at least it will cook evenly.  (And besides, it takes a long time for meat to reach room temperature on the counter top, so you’re either waiting while it’s on the counter, or waiting while it’s cooking.)

The vast majority of the time, I do this in the traditional order – Sear first, warm second.  The only time I use a ‘reverse sear’ (bring the beef up to temperature and then searing the outside) is if I’m doing a steak or beef tenderloin roast in the kitchen on a pan with the end in mind of making a pan sauce – in that case I’ll warm the beef up at 275F in the oven and finish it off on a super hot cast iron skillet (a more specific recipe will be in another post).

For an Oven Roast Beef:

Preheat your oven to 500F.  When it’s up to temp pull your roast out of the fridge, rub the top with olive oil, season generously with kosher salt and freshly cracked pepper, and place it on your grill grate or cooling rack which should already be on top of your drip pan.  Place the whole thing in the center of the oven and shut the door.  Roast for at 500F for 10 to 12 minutes or until a nice crust has formed on the outside.  Pull the roast out of the oven, and let the oven come down to 275-300F.  When it’s down to temperature, stick it back in the oven roast until an instant read thermometer yields a reading of 120-125F.  For a large roast, carry-over cooking will bring the roast up another 10F while it rests, meaning that at serving time it will be a perfect 130-135F (the larger the roast, the greater the carry-over).

For a steak on the grill:

If using gas, light two burners on one side for the ‘hot side’ and leave the other side as the ‘cool side’ – if using charcoal, bank your coals to one side.  Pull your steaks out of the fridge and rub with olive oil and then season generously with kosher salt and fresh ground pepper.  Place them on the hot side of the grill, about 2-3 minutes per side with the lid open, and then place them on the cool side of the grill with the lid shut.  Pull them when an instant read thermometer reads 130-135F (for steaks, the carry-over effect is much less, because they’re much smaller).

To pan fry a steak in the kitchen:

Preheat your oven to 275 – 300F.  Pull your steaks out of the fridge, rub them with olive oil, and then season generously with kosher salt and fresh ground pepper.  Place them in the oven on a baking sheet for about 15-20 minutes, or until internal temp is around 110-115F.  While the steaks are warming up in the oven, heat a cast iron, stainless steel, or copper skillet to screaming stupid hot.  When the steaks come out of the oven, place them in the pan for 1-2 minutes per side to sear and form a nice crust.  Remove steaks from pan and set aside.  If you wish, you can use the remaining bits in the pan to make a nice pan sauce for your steaks.

Also, you could always try your hand at sous vide which takes this principal to its maximum, ultimate conclusion.  No matter what you try, follow these tips and get ready to up your red meat game!