How to Make Chowder

This post invites you to experiment – it is a blueprint and a technique, not a rigid recipe that must be followed. Use whatever ingredients you have on hand, or whatever you like.

There is a lot of fierce debate about what makes a soup a chowder – or if chowder is a type of soup or its own thing. Some will argue that it must have seafood – but there’s corn chowder and potato chowder – and probably others. Others will claim that chowder has a white base – but then there’s Manhattan clam chowder which has a tomato base. Of all the variations out there, however, there are a few defining rules that make chowder what it is:

Rule #1: It starts with pork – usually, but not always, bacon. Bacon or other smoked pork gives chowder its distinctive smokey flavor.

Rule #2: It is chunky. This is not a bisque or smooth pureé or even a rustic soup. Chowder is somewhere between soup and stew.

Rule #3: There is a thickening agent of some kind – a roux, a slurry or just plain cream, but a true chowder is pretty thick.

Without Further ado, here’s your chowder blueprint. Chowder is generally a one pot wonder, so follow these seven steps and see what happens. You may add any or all of the ingredients for each category, but remember, simpler is usually better. Point is, have fun.

After adding thickener, reduce to desired consistency. Remember two things during this step: First, slurries are very powerful thickeners. Second, never add raw flour at the end – it will take a long time too cook out. If you’re going to add flour, do it in the form of a roux, or add it between steps 3 and 4 and cook for a few minutes until it is lightly browned.

Leave comments below and let me know how your chowder adventure turned out! 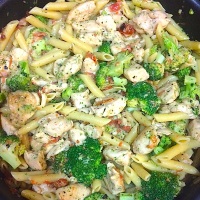