September 25, 2016 · by jamesbradfordgray · in Chicken, Dinner Tonight, In the Kitchen, Inspiration, New World, On the Grill, Recipes · 1 Comment

Served with an authentic but lesser-known Alabama White Sauce, this BBQ chicken is succulent and tender on the inside with crispy, bite through skin on the outside.  Daintily eat with knife and fork, or gnaw off the bone caveman style.  Your choice.

I think one of the reasons people don’t like to eat chicken skin (my wife being one of these people; she pulls it off no matter what) is the general frustration associated with it.  There’s nothing worse than biting into a nice piece of BBQ chicken and having all the skin pull off all at once, dangling unattractively out of your mouth and covering your chin.  You know what I’m talking about.  This leaves eaters one of two choices:  Remove the skin and forget about eating it, or eat it by itself.

There is, however, a third option – bite through skin.  You get just want you want, nothing more, nothing less; this is the Holy Grail of BBQ Chicken – so much so, in fact, that professional competition BBQ teams will often go to great lengths to achieve it, using time consuming techniques including, but not limited to, all kinds of crazy things, like removing it, cooking it separately, and putting it back on.  Like I said, crazy.  Also unnecessary if you know the one trick in this post.

The secret to achieving bite-through skin is simply doing a reverse sear and then, during the searing process, making sure the skin has good contact with the cooking surface.  Chicken skin has a lot of fat in it, and underneath it, which is why if you sear first (especially on a BBQ grill) it’s all just going to cause flare-ups and catch fire before anything else has even had the chance to warm up.  What you’ve got to do is render 99% of the fat out of the meat before searing it, and at the last minute expose the chicken skin side down to a hot surface.  This can be done on the grill, or in the kitchen; both techniques are included here.

How To: On the Grill

If using charcoal, build a 2-zone fire, banking the coals all to one side.  If using gas, light one or two burners only.   Toss a few wood chunks (I prefer a mixture of apple and pecan, no need to soak them first) onto the coals or into a smoker box.   Underneath the grill grates, on the cool side of the grill, place a disposable baking tray filled 1/2 – 3/4 of an inch of water; remember, a lot of fat is going to render so we want something to catch it in and cool it off immediately.  I typically remove one of the grill grates during 2-zone cooking (which, for me, is most of the time) so that I can slide the meat from one side of the grill to the other (cool to hot) without actually having to pick it up and move it around too much.

Shoot for a temperature of 275F – 300F at grate level (invest in an oven thermometer to be sure you’ve got an accurate read; even if you have a thermometer built into your grill, chances are it’s off by as much as 50F).

While the grill is coming up to temp, pull your chicken out of the fridge and place in a large mixing bowl with olive oil.  Toss to coat (you need something for the rub to stick to).  Add the Classic BBQ Rub and toss again.  (Alternatively, rub the chicken with olive oil on both sides and then rub the rub onto it, on both sides – tossing is easier).

Place the chicken on the cool side of the grill, skin side up, and cover.  Depending on the temp of your grill and how much chicken you’ve got on there, it could take anywhere between 1-2 hours to hit an internal temp of 160F, so start checking after about an hour or so.  During this time, make the sauce – simply whisk all the ingredients together in a small bowl and refrigerate.

About halfway through the cooking time (when the chicken’s internal temp is about 140F, use an instant read thermometer to test this), pour off a bit of your White Sauce into another container and head out to the grill.  Baste the chicken generously with the sauce and shut the lid.

When the chicken is up to about 160F, most of the fat should be rendered out of it, flip it over, skin side down, place something heavy on top of it to ensure good contact with the grill grates (I use a large cast iron griddle, but you could also use bricks or a heavy skillet – whatever works) and leave it to cook 10 minutes more on the cool side of the grill.  By this time it’s basically safe to eat, so you’re not going to screw anything up – we’re just perfecting the skin.  After about 10 minutes, slide the chicken over to the hot side of the grill and sear for 5 – 10 minutes.  Remove, and place on a serving platter skin side up.  Baste again with sauce.

Serve remaining sauce (the stuff still in the fridge, not what you used to baste) as a dipping sauce, if you like.

How To:  In the Kitchen

If you don’t have access to a grill, you can still make this delicious recipe in the kitchen (I’ve done it this way too, you just miss out a bit on the smokey flavor).  Begin by preheating your oven to 300F.  Fill a disposable aluminum tray with 1 inch water.  Place a cooling rack on top of that.  Place the chicken, skin side up, on the cooling rack and bake until chicken’s internal temp is about 160F.  When it hits the 160F mark, flip it over and plonk something heavy on top and return it to the oven for about 10 minutes.  During this time, heat a cast iron skillet or copper pan to very hot, over high heat.  After the ten minutes skin-side down in the oven, transfer the chicken to the skillet and brown for about 2-3 minutes, skin side down, and set aside.  Work in batches if necessary; don’t overcrowd the chicken quarters in the skillet.

Usually I’ll opt to drink a dry, crisp IPA with this meal, but the other night I drank a fairly robust Cabernet, and that was pretty good too.

*I would be remiss not to credit Amazing Ribs for the sauce recipe. As the author, Meathead, points out, this is just one version of what is an Alabama favorite. I’ve only modified his recipe ever so slightly. To check out his version, click here.  His version is pretty damn good too. 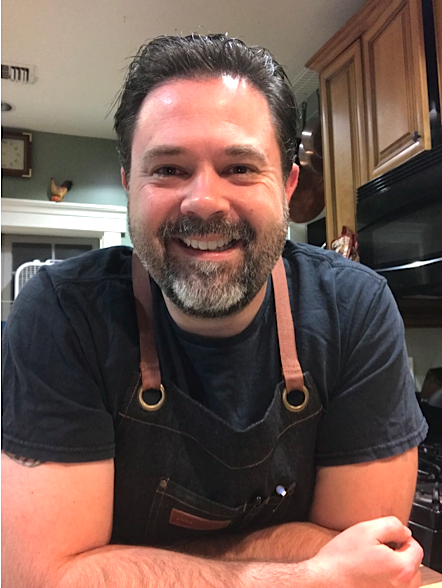 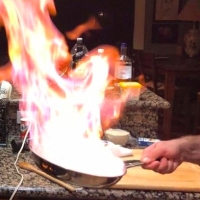 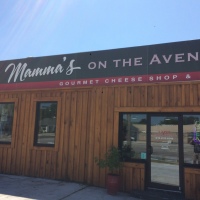 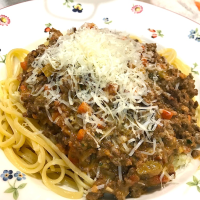 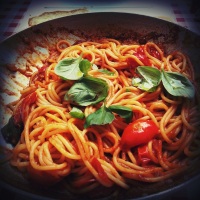 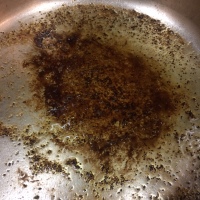 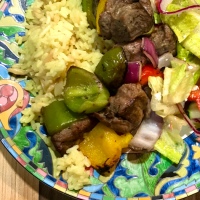