August 21, 2019 · by jamesbradfordgray · in Beef and Lamb, Inspiration, On the Grill, Sciency Stuff, Tips & Techniques · Leave a comment

Ever wonder how steakhouses achieve such a beautiful crust on the outside of their steaks? The answer is simple: Heat. Really, really, really, high heat.

We’re talking like 750°F – 1000°F hot here. The world famous Ruth’s Chris Steakhouse purportedly sears their steaks at a blinding 1800°F. Further research reveals that, since they use infrared ovens which cook the steak from both sides (top and bottom) simultaneously, their claim is a bit tenuous – they’re only using a mere 900°F per side.

Anyhow, no home cook is going to be able to procure an infrared oven that’ll get that hot and still be safe, not for home use anyway. You can get a cast iron skillet up to about 550°F before you risk stripping the seasoning off (NOT a good flavor, and terrible for your skillet) but you’ll still fill your house with smoke in the process. This was, however, about the closest I ever got to a steakhouse sear – until I tried this:

The process was simple. I filled a chimney starter fully with lump charcoal, placed it on an old cast iron skillet inside my grill, and set it ablaze.

Once the coals were hot and ashey, I dumped them into the cast iron skillet and spread them out. Then I placed a spare grill grate right on top of the skillet. I don’t know how hot it was, but it was but it was somewhere over 1022°F because my trusty old infrared thermometer gave me a big fat “E” when I tried to temp the cooking surface – something that had never happened to me before.

The best part about this whole thing is that it was really quite easy and the results… well, they speak for themselves. 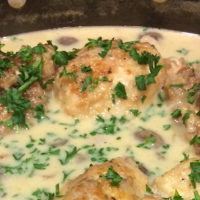